By Better Minds at Work11 April 2019 No Comments

‘It won’t happen that fast.’. If there is one constant in the history of mankind, it is that great revolutions are invariably preceded by this killer argument. Now that Artificial Intelligence (AI) is no longer in the distant future, but already a daily reality, I still hear the same thing. But… don’t you have a smartphone, tablet, laptop or GPS? In that case, welcome to the era of Homo Digitalis!

This is an age in which robots and humans live alongside each other and with each other. Not those terrible killer bots and terminators that Hollywood dishes up, but sweet, obliging robots that do little chores for us. In the United States, a quarter of all families get help in the home from a domestic robot, veterans with post-traumatic stress disorder are assisted by AI, and if you don’t have enough affection in your life you can call on robotic dog Aido or, depending on your needs, there is the LovePlus love robot.”

It’s evident that there is no consensus as yet on what we all think about this. Opinions, even among experts, are extremely divided. You hear occasional horror scenarios about humans becoming slaves to AI and tales that we as human beings will become virtually redundant in the workplace. By 2020, according to some estimates, as many as 5 million jobs will apparently be performed by computers. It is estimated that robots will have taken over a third of the jobs in the United States in 2030.

as many as 5 million jobs will apparently

be performed by computers.”

More and more people are feeling that they’ve lost control, that they are powerless in the face of these developments. We feel that we have let go of the reins, and a number of people are already asking loudly whether we can handle all this. Can our brains deal with all these changes?

The unequivocal and optimistic answer is: yes. After all, our brains have a secret weapon, something that no machine in the world will ever have – our brains are authentic. Nothing in the hands, nothing up the sleeves, just the most powerful weapon ever. Especially in the era of AI.

“Our brains have a secret weapon,

something that no machine

in the world will ever have,

our brains are authentic.”

Garry Kasparov, the Russian king of chess, who in 1995 became the first person to lose a game of chess against a computer, said: ‘Instead of worrying about what machines can do, we should worry more about what we can do that they can’t.’ That’s how I see it too. And that’s what I call our ‘Authentic Intelligence’: the ability to enhance and use your uniquely human qualities.

Like the fact that people can reinvent themselves and change their focus or tread a path that has never been explored. Human beings push back their boundaries every single day. On the basis of logic, but also inspired by experiences, emotions and other people. Computers can’t do this; they search for their answers always and exclusively on the basis of (programmed or learned) mathematical logic and always choose the safest way. People, on the other hand, are able to persevere and to find their own way, against all the odds and against all opposition. Our ability to reprogramme is the basis for achieving more with your mental capital. 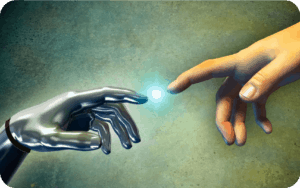 A second uniquely human quality is our ability to resist, to oppose. Not just an occupying power or an unethical business owner, but, even more so, ourselves. People can control their impulses purely on the basis of willpower. A computer doesn’t have any willpower. It has to follow orders.

A third quality is fantasising, imagining, creating. It was this ability which ensured that we escaped the dark caves and created a world of human rights and nation states, skyscrapers, flip-flops, ice cream and, yes, AI. In this AI era it is no longer a case of ‘I think, therefore I am’, but ‘I imagine, therefore I am’.

Another purely human strength is our ability to develop authentic relationships with our fellow humans. Israeli historian Yuval Noah Harari talks about this in his book Sapiens as the main explanation for the fact that we as a species have managed to become the rulers of the earth: we are able to develop deeper relationships with more people than any other animal species. Computers can’t do this at all, no matter what the LovePlus robot would have you believe. Even though it seems as though we are losing this quality in these times of polarisation and isolation, the potential is still there.

All these qualities make us as humans not only unique, but also authentic. And in this authenticity lies not just our best chance of survival as a species, but also of changing our own lives. Even those who don’t worry one little bit about technology, digitisation and robotics are well advised to develop these qualities further and to make better use of them in order to live a happier, more meaningful and more successful life.